This December I am keeping an advent calendar.

Advent is traditionally the period during which the celebration of the birth of Christ is anticipated. During my travels over the past few weeks, I have seen some of the world’s most miraculous works of art, a reason for thankfulness and celebration. And for anticipation, of all the great art I haven’t seen yet, but that is out there, waiting to be discovered. These art encounters made me decide to do a virtual Art Advent calendar – as a celebration and anticipation of all the art that makes life so much more fulfilled.

The virtual calendar consists of daily posts on my social media, and weekly overview posts on this blog.

This was the last one, week 3.

17 Dec. Art Advent #15. This pretty magnificent painting by a 17th-century Flemish painter, displays the importance of choosing wisely in life. The male figure seated off-center is thought to represent humanity, with historical, mythical, and Biblical figures coming in from the left. On his right are allegories of sensual pleasures. The female figure in the center is Minerva, Goddess of Wisdom, surrounded by Faith, Hope, and Charity. When you don’t choose wisely in the earthly realm, the underworld awaits: with the devil guarding the gates of hell, the monkey king as parody on earthly power, and a blind cupid personifying lust and desire. The figures left and right connecting the two levels are Death and Father Time. To me, it is a timeless allegory, painted in an incredibly imaginative manner.|| Frans Franken The Younger, Allegory of Man’s Choice, ca.1635.

18 Dec. Art Advent #16. Mondays are for artists inspired by Mondrian. This is by Ben Nicholson, who met Mondrian in Paris in the 1930s. In his early works, Nicholson experimented with monochromatic reliefs, abstract forms combined in different shades of white. He made this painting in 1938, the year Mondrian moved to London. Nicholson found Mondrian a studio in Hampstead, North London. The Dutch painter inspired Nicholson to work with more geometric shapes for a while. Although he also used a reduced color palette, Nicholson never used solely primary colors. After a period of strict abstraction, he returned to figuration again. During these London years, Nicholson was married to sculptor Barbara Hepworth, with whom he had triplets. The story goes Mondrian adored the company of their children, leading Hepworth to think a family would not have been unbecoming on him. This spring I had the pleasure of visiting the house where Hepworth lived with the triplets – a beautiful little place with windows up to the ceiling. Truly an artist’s house. The current owner, an artist herself, had a carpet made with a Nicholson motif. Full circle, indeed. || Ben Nicholson, 1938 (Composition), 1938

19 Dec. Art Advent #17. My very favorite thing about this painting is the set of wet footprints on the the floor. It is almost as if you can see them dry up in front of you, like water on a wood floor does. The subject matter of this work is highly unusual. Often we see women bathing, but hardly ever men. Even less so, a man alone, in the comfort of his own home. The scale of this painting is enormous, a size generally reserved in the nineteenth century for paintings of important historical or Biblical scenes. The first time I saw this painting was when it was on loan to the National Gallery, when I studied in London. Seeing it again, so many years later, made me remember how distressed I was, the day I walked into the London gallery, anticipating to see it and it wasn’t there anymore. Obviously, loans have to be returned at some point. But without really realizing, I had grown very fond of this work. Now, in Boston, I didn’t know it would be there. It was an unexpected, delightful rendez-vous. || Gustave Caillebotte, Man at his Bath, 1884.

20 Dec. Art Advent #18. When in 1891 he left France and embarked on his first trip to Tahiti, Paul Gauguin hoped to discover an unspoiled paradise. Much to his dislike, he instead ran into French colonial authorities and many financial struggles after his arrival. In 1897, he made a monumental painting there, exploring fundamental existential questions: “Where do we come from? What are we? Where are we going?” It is now on display in Boston, accompanied by this small work. Gauguin made it when he already suffered from illness and mostly painted the views around his house on Hiva Oa, a remote island. On the hilltop in the back stands a white cross. It represents French missionary activity in the region, which Gauguin rarely included in his work. It marks the cemetery where he was buried, when he passed away not too long after finishing this painting. || Paul Gauguin, Women and a white horse, 1903.

21 Dec. Art Advent #19. British painter David Hockney is one of today’s most celebrated artists. In the 1960s, he was a great contributor to Pop-Art, more recently landscape painting has become his main focus. Painting in the British countryside, he portrays sites that are dear to him. And his work has become dear to me during 2017. Having seen his grand retrospective at Tate Britain in the spring and now recently at the MET, I realized what a skilled painter he is. Over the summer we also saw an exhibition in Venice with 82 portraits (and 1 still-life) he had made of friends and acquaintances. Such a simple concept, brilliantly executed. His portraits are, like his landscapes, full of character and excitement. The works show his love for painting, an art form that has been declared dead over and over again. Yet, Hockney masters the trade of keeping it alive. || David Hockney, Elderflower Blossom, Kilham, July 2006.

22 Dec. Art Advent #20. German artist and Bauhaus teacher Josef Albers was fascinated with Aztec architecture. In fact, many of his highly abstract compositions are based on photos and studies of famous temples and other religious buildings, which he made on his travels to Mexico. This painting is called Tenayuca, after the Meso-American archeological site in the Valley of Mexico. He would reduce the architectural forms to their most essential structures, which he then translated to balanced color schemes. According to Albers, abstraction was real, “probably more real than nature.” || Josef Albers, Tenayuca, 1943.

23 Dec. Art Advent #21. For long, Édouard Manet has been one of my favorite painters. He consistently painted new, modern takes on traditional motifs. This is a more personal picture, a portrait of his wife Suzanne Leenhoff. Manet met this Dutch painist when she was teaching piano lessons to his younger brother. Leenhoff and Manet married in 1863 in the Dutch town of Zaltbommel. This was a year after Manet’s father – who would have certainly disapproved – passed away. The marriage took place in the St. Martin’s Basilica, one of the most important early Gothic churches in The Netherlands. Leenhoff posed for Manet on several occasions. He made this portrait in Bellevue, a Parisian suburb, where the couple spent the summer of 1880. It was the last portrait he’d make of his wife. || Édouard Manet, Madame Manet at Bellevue, 1880. 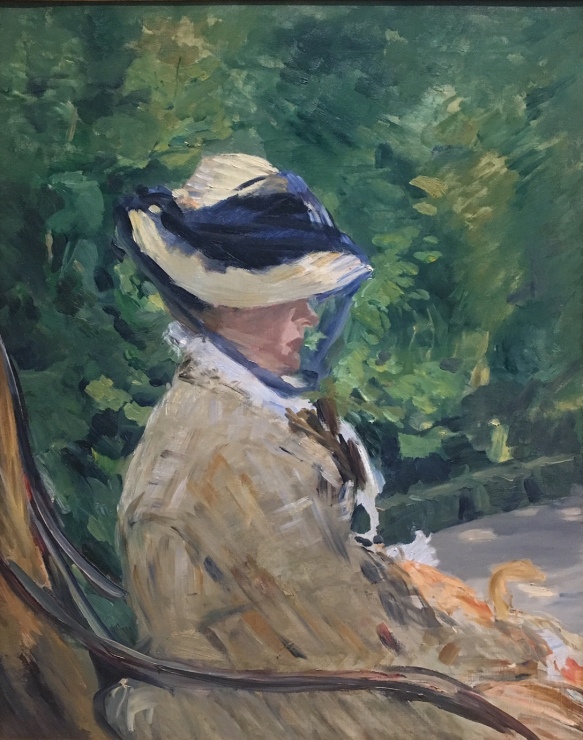 24 Dec. Art Advent #22. This is a detail of a much larger cloth, made out of bottle caps and metal wire. There are several reasons why I chose this work as the final Advent entry. Its golden colors resonate with the Glory of Christmas Eve. Also, the work has an enormous transformational power. The artist turned waste into something beautiful, something sacred. Once he has made the cloths, he challenges museums to hang or install them as they like. Giving the work new appearances over and over again. And, most importantly, my mother was an avid quilter. I think she could have appreciated this work, which so strongly resonates to traditional textile techniques. On a night like Christmas Eve, she is even more dearly missed. With this final post, I say a Merry Christmas to you, with loved ones nearby or ever so far away. || El Anatsui, Society Woman’s Cloth, 2006.